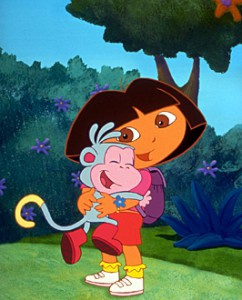 caption: DORA THE EXPLORER, Nick Jr.’s new original play along, animated adventure series, features a 7-year-old Latino heroine who lives inside a computer. Dora is proudly bi-lingual and uses her knowledge of the Spanish language to communicate with her friends, overcome obstacles and reach her goals. In each episode, Dora teaches the viewers a Spanish word or phrase and then asks them to use it to forge ahead to solve a problem. Dora and her friend Boots (pictured with Dora) ultimately triumph, causing her stories to end with a “We did it!” anthem. DORA THE EXPLORER, a Nick Jr. production, debuted on Nick Jr. in August 2000. It will be broadcast on the CBS Television Network as part of the Network’s children’s lineup.
copyright:
©2002 CBS Worldwide Inc. All Rights Reserved